My plane from Sydney has just been delayed 4 hours.  I’ve just finished up facilitating a day long workshop with a high energy client.  My brain is alive with ideas, i’m pumped, so what better time to write a blog on innovation.

Ok, i’m going to correct myself right here.  You don’t GET people to innovate.  As a leader you create an environment where innovation, ideas and suggestions are the norm.  Then, using the right ‘tools’ you stimulate and capture innovation.

Innovation, sadly its a term that has been used to death, but I hope that it never loses its importance in peoples priorities.

The days of having an idea then milking the market for 20 years with the same idea are all-but-gone.  Companies, and now Governments need to continually be coming up with better ways to do what they do, continually changing what they do, testing, ditching the failures, leveraging the wins and trying again.

… but how to do embed a culture of innovation through our your team, your department, division or enterprise?

I have implemented what I call the ‘Innovation To Implementation Cycle’ which has consistently shown great results – it is not easy to implement, but if you don’t…

I’m going to put some videos together that explain this in more detail but in this post I will try and capture the high level steps.

Blame and punishment for failure is the fastest way to squash innovation. Most people find it quite confronting to suggest an idea – they are afraid their peers will laugh at them, or that they will be punished if the idea doesn’t work, so instead of bringing the gift of innovation to work, they share their ideas out of work to people who they are comfortable with and who usually dont have anything to do with their organisation.  Worse, they share the idea with a friend who works for a competitor.

Create An Environment For Innovation

Don’t assign innovation to one person.  It is a team effort.  Let the team manage their innovation, let them decide if an idea is worth perusing, get them discussing it, debating it.  Ensure the idea creator(s) has a fair say in the debate too.

To stimulate innovation, large or small, I like to remove decisions and replace with hypothesis.  A hypothesis is neither write nor wrong, it simply has an outcome.  The desired outcome is written down and placed in an area where the team can all see it.  We measure the outcome at a defined period, I like two weeks,  against the desired outcome, and if required try again, modify and try again, or move on.

Here is a popular format for capturing hypothesis.  Notice how we capture four specific criteria.  This is important for the measuring and tracking. 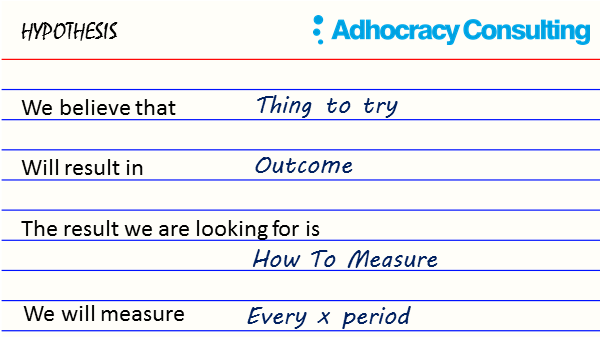 Here is an example of a completed card.  Note the wording.  We ensure that the words used enable the hypothesis to be read like a story.  The story flows in plain english. 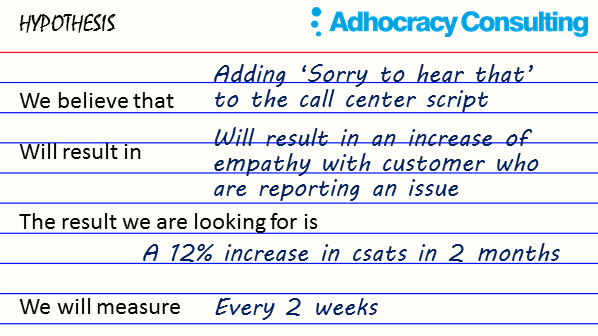 The next killer of innovation is lack of action.  Employees and customers want to improve, they want to be engaged, they want to make a difference.  How many times to you hear that someone made a suggestion to their manager and never heard anything back, or worse, someone else took the credit.  Innovation:Dead.

Get teams together to discuss their work.  Agile has two ceremonies that help with this; a review and a retrospective.

Review what you did.

A review is to, you guessed it, review the work that was done; .  Celebrate the work that has been completed and look at KPI’s, quality, quantity, etc.  Capture comments like “I rekon if we did … we’d do more …”  There is an hypothesis right there.  Flesh it out into the format above and stick it on your wall.

Don’t forget to review the open hypothesis as well and modify actions until you get the desired outcome.

Review how you did it.

Reviewing how you did it is called a retrospective.  I believe that the retrospective, when combined with the hypothesis is one of the most powerful tools in a leaders kit bag.

Once again, capture the comments “If we change …, I rekon … will happen” – turn it into an hypothesis, action and track.

There are four outcomes for an hypothesis… and they are all P’s!

Stick it in the calendar!

Once you have identified a change that meets your required outcomes it is time to permanently implement it into your BAU activity.  Setup a change/release calendar in an area that everyone can see.  Schedule when the changes will take place and inform the idea creator(s).  By seeing that their idea has been tested, received due attention and is now being implemented will inspire them to come up with more innovative ideas.

If the team decides an idea is not worth testing, or that the testing will never deliver the required outcome the team must make the decision to not proceed.  Document the reason(s) on the back of the card and move to a column on the wall for parked ideas.  Its good to keep the binned ideas as it shows that innovation is alive and well, and that that its not a bad thing to bin an idea.

In the end it is all about the environment you create.  Celebrate fails as well as wins.  Remove the fear of failure. Failure is the best way to learn, we learn more from failure than we do from success.

Keep an eye out for the videos as they will explain in more detail.

2 hours until my flight!

Bring the spirit of leadership back.
Be Brave - Trust, Truth, Transparency.

Find yourself in this situation?  Give us a call for a chat. We love assisting companies and business leaders through this challenging time.